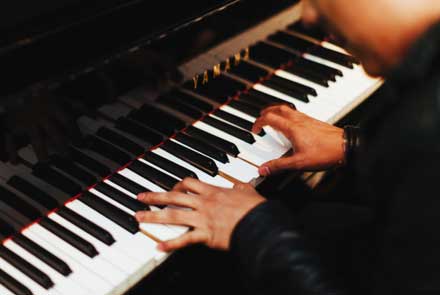 Transcription can be a very effective tool for learning how to improvise but if you’re just starting out, it can feel like quite an overwhelming task. Especially if the tempo is 300bpm, the song is in B and if the artist you’re transcribing is Parker or Coltrane.

Picture this. If you’ve ever set out at the beginning of the day determined to transcribe 3 choruses of a solo by lunch; only to find that by the 16th bar you’re left more frustrated than monkey in a canned banana factory, you’re not alone. I’ve definitely been there. So to help you out, here are 12 killer ways to transcribe jazz solos at LIGHTNING SPEED:

Before actually transcribing a solo, listen to it once through and isolate the trickier passages. Think of it as a musical reconnaissance. Once you identify the difficult sections, skip over them and set aside a specific time to work on it later. Focus on the other parts of the solo which are relatively easier to pick out. By doing so, you would be able to flesh out at least 70-80% of the improv immediately; leaving you the clarity of mind to decipher the more intricate phrases at your own pace. The trick is not to get hung up on those 1 or 2 bars that are challenging, as most of the material in the simpler passages will definitely hint towards the harder ones.

Determining the form and layout of a tune helps TREMENDOUSLY when you need clear indicators of where a soloist is at during their solo. It allows you to bring yourself back to the nearest checkpoint if you get lost, instead of having to rewind the track all the way to the start. There are 5 basic types of jazz forms: 12 Bar Blues, AABA, AB, Irregular and Through Composed. Get familiar with them. They are your road maps and can save you loads of time in the event you veer slightly off course whilst transcribing.

ALWAYS get the chords 1st BEFORE the notes. Chord progressions make up a staple part of jazz improvisation, and being aware of what goes on underneath can eliminate a lot of the guesswork that arises if you don’t have any harmonic reference points. Superimposing secondary dominants and tritone substitutions on top of the original chords are a very common practice too, so revise your chord theory! You’ll be surprised how effective this is when it comes to predicting what happens next in a solo.

4. Scrawl out the notes without the rhythms

Discovering the cool notes in an improvisation is the main reason why most people want to transcribe solos in the 1st place. But many make the mistake of focusing ONLY on 1 or 2 bars at a time, attempting to get ALL the rhythms and other musical aspects accurate before moving on to the next section. This actually slows the transcription process down. Instead, it’s much faster to scrawl entire phrases out first, WITHOUT the rhythms.

Here is an example of what a rough melodic outline would look like on Lee Morgan’s trumpet solo in the 1st chorus of Art Blakey’s “Moanin’”:

As you can see, this sketch gives you a bird’s eye view of where the phrases fit over the chords, and makes it easier to match the corresponding rhythms later on.

16th notes. Every transcriber’s nemesis and the bane of the play and pause button on various playback devices. If you’re having difficulties notating a flurry of semiquavers and tuplets, here is a neat trick to transcribing them quicker. 1st, mark the notes which fall on the downbeats of each bar.

Next, listen to that section again and try to make an educated guess of the notes that occur in between. For instance, if you get a Dm7 chord and you’ve penciled in “A” on the 1st downbeat and “D” on the 2nd beat, there is a high chance that the 3 other semiquavers between beat 1 and 2 would be “Bb, B, C or C#”.

Keep using this “connect the dots” method for other the complicated parts of a solo and you’ll be able to transcribe at LIGHTNING speed in no time.

Transcribing syncopated rhythms is particularly hard when you don’t have a constant trail of quavers or semiquavers that gives you a skeletal rhythmic outline. However, there is a useful way in which you can reduce the amount of time figuring them out.

This may seem strange, but imagine your left hand as 4 semiquavers. As you transcribe, tap your fingers from left to right starting with the pinky and ending on the index; the pinky being the 1st semiquaver, the ring finger being the 2nd, the middle being the 3rd and the index being the 4th. By doing this, you’re creating a physical representation of where the syncopations occur in a phrase; and this helps your brain visualize the complex rhythms better, resulting in speedier and much more accurate notation.

7. Use a “slow down” tool if necessary

There’s always a certain stigma attached to using a “slow down” tool or software to transcribe a solo in order to hear what’s going on in the music. It can feel like you’re cheating, especially when you’re listening to the solo reduced to 4 times its original speed.

But let’s face it, some solos are just way too quick for the ear to hear naturally. Take Charlie Parker’s “Anthropology” for example. With a scorching tempo of 290 bpm, this is insanely fast to transcribe even for the most advanced players. Thankfully we live in an age where there are plenty of available resources to aid in transcription; and they should be used to our advantage, not seen as a crutch.

Programs like Transcribe!, Audacity, Logic or ProTools all have a “slow down” function that can help massively when it comes to working out breakneck solos. So don’t be reluctant to slow stuff down when you have to!

Listen to jazz solos long enough and you’ll be able to pick out many melodic and harmonic patterns that soloists often “copy” from previous recordings. This could be anywhere from using a melodic minor modes on dominant chords to employing bluesy fills in a turnaround.

You’ll find that no matter the sub-genre, be it swing, latin, bebop, cool jazz or jazz fusion; there will always be a common jazz vocabulary that ties the styles together. And learning the language gives you the ability to complete a soloist’s musical sentence, even before they state it.

When you know what an instrument can do, it’s easier to second guess what’s happening in a solo. For example, it’s physically impossible for an acoustic piano to pitch bend a note, or for a violin in standard tuning to play an F# below G3.

So if there’s that one low note you’re trying to hear in the violin solo, chances are it’s not going to be an F#, unless the violinist intentionally detuned that string. In which case he should be shot.

Getting acquainted with ranges, effects and other idiosyncrasies of the instrument you’re transcribing enable you to be doubly sure you’re getting the notes right, so you don’t have to keep rewinding back to check every few bars.

Igor Stravinsky once said: "Lesser artistes borrow, great artistes steal.” It is definitely tempting to scour the internet for already transcribed solos, particularly if you’re transcribing for an assignment that’s due on Monday morning; and you just don’t have the capacity to finish it before the deadline.

Now, while I don’t condone the wholesale copying of someone else’s work, because you’re literally not learning anything that way; it IS a good means to verify if what you’ve written is correct. And this of course, should be done AFTER you’ve attempted to transcribe the solo yourself.

By comparing your work with others, you’ll find that quite often, you DO catch one or two things you may have missed out initially; and it helps you remember not to make the same errors for future transcriptions.

When you’ve exhausted all possible avenues of working out a transcription by yourself, it’s time to turn to the big boys for help. Professional jazz musicians are trained with years of experience and their ears are better attuned to the intricacies of the style.

Although it may feel quite daunting asking them to take time of their busy schedule, don’t be afraid to pull them aside at a jam session to assist you with that bar that’s been keeping you up at 3am every night. You’d be pleasantly surprised by the number of pros who are eager to help. Some are just happy to do it for the passion. Remember, they were once in your shoes too.

About a year ago, one of my students asked me: “Sir, how do you improvise better? I keep playing the same solo ideas over and over again and don’t know what else to do.” Not wanting to go into a whole barrage of music theory, I replied, “Which pianists do you listen to?” Her answer told me everything. Yiruma. Not Oscar, not Chic, not even Tatum. @#$% Yiruma.

If you’re familiar with the phrase “You are what you eat”, then likewise, this can be translated into “You play what you listen to”. If you listen to sappy pop instrumentals all the time, you’re going to sound EXACTLY like that when you play. This goes for transcribing as well. You won’t have an inkling about what a jazz soloist is doing if your whole playlist consists solely of Bieber, Clayderman and One Direction.

So in order to avoid having NO direction when it comes to transcribing, start listening to the jazz greats today. Miles, Parker, Coltrane and the likes. You’ll soon be able to assimilate the jazz vernacular which is a necessary tool to transcribing solos at LIGHTNING SPEED.

Now that you’ve read 12 killer ways to transcribe solos at lightning speed, are there any points above that struck a chord with you? What other ways can you think of that would help in transcribing jazz solos quicker? I’d like to know! Leave your comments below.